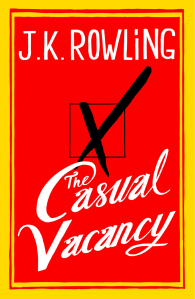 // One of the great pleasures / responsibilities of being a lit critic is that you are asked to review countless debut novels. When I first began reviewing, I remember this feeling unusual to me – coming as I did from a background in academia, where you generally don’t read anything without an almost infuriating knowledge of every critical perspective, every last theoretical interpretation, every minute biographical detail.

What struck me about latest release debuts is how pure, almost virginal the experience of reading them is. How free I am from anything that might sway me one way or another in my interpretation of the text.

With established authors, however, it appears that any new novel is judged though the prism of their previous works. It’s the Faustian contract writers enter into when they publish their first novel: if granted any level of success, you’ll never be free of your earlier works, and everything you do will be inescapably judged against it.

And so it was with the release of J.K. Rowling’s The Casual Vacancy, consigned in almost every review I read to a comparison with the Harry Potter books – Pagford is said to be populated with Muggles, one of the principal familiesdescribed as pale imitations of the Dursleys, the book retitled (admittedly rather brilliantly) Mugglemarch.

However inevitable it was, it all seemed slightly unfair – not only to the author but to the text itself.

I came to The Casual Vacancy as no great Rowling fan. I’ve never lined up for any of the films, have never once scrawled a lightning-shaped scar on my forehead or donned a black wizard’s cape. I’ve read the novels, of course, and I remember enjoying them in a diversionary way, but I was slightly older than their intended audience once Potter-mania had taken hold, too busy with schoolwork and parties to worry much about Harry and his friends.

There are, then, readers far more susceptible, far more tied to the Potterverse than myself. And yet, I too couldn’t get the notion that this was written by the author of the Harry Potter books out of my head.

So with all the publicity upon the release of The Casual Vacancy, the question I kept coming back to was this: To what extent is it the fault of the reader for being unable to forget the author’s past works and read the text on its own merits? To shed the weight of their own expectation?

Rowling’s debut onto the Not For Children scene begins with the death of a councilor, Barry Fairbrother. His death results in an opening on the council (a ‘casual vacancy’) and the ensuing battle about who should occupy the seat, and therefore win the wider factional war over the town of Pagford’s wish to remove The Fields from its borders – a housing commission where “graffiti blossom[s] on the bridges,” the locals throw rocks at street lamps, “and worse.”

Of a topic that sounds admittedly rather dull on paper, Rowling manages to weave the threads of her story into an intricate tale of several families and their petty concerns, grievances, lusts and fears. The news of Barry Fairbrother’s death ripples out through the township, seeming “to effervesce in the atmosphere, like bubbling champagne,” and the casual vacancy glimmers with possibility.

But there are those in the town who are disgusted by the campaigning, seeking to sabotage the efforts of the potential candidates. And so the formerly stagnant message board of the parish council website becomes the lively and salacious centre of the storm when it begins to display messages from The Ghost of Barry Fairbrother, who appears to know the deepest darkest secrets of those who wish to occupy his seat.

Rowling has a particular knack for creating intricate, believable worlds. It’s set in a picturesque and quintessentially ‘English’ town, “the pretty little town of Pagford,” so quaint I almost expected there to be a drawing of a map on the inside cover. But besides all this surface English loveliness of stone cottages and green countryside is the violence, addiction, teenage sex, death and general murkiness about which there were howls of concern.

By page three, Barry Fairbrother is dead, “in a pool of his own vomit,” and is later described as becoming, in the imagination of his townsfolk, “no more than an eruption of vomit and piss, a twitching pile of catastrophe.” In the Fields, “a used condom glisten[s] in the grass…like the gossamer cocoon of some huge grub.” There are gynecologically detailed descriptions of online porn “shaven vulvas; pink labia pulled wide to show darkly gaping slits,” and children and wives are beaten, “he ran at her and hit her in the face, exactly as he had wanted to when he had first seen her silly frightened expression.”

There are times when the explicitness and vulgarity is comical, such as Rowling’s almost Dickensian description of Howard:

He was an extravagantly obese man of sixty-four. A great apron of stomach fell so far down in front of his thighs that most people thought instantly of his penis when they first clapped eyes on him, wondering when he had last seen it, how he washed it, how he managed to perform any of the acts for which a penis is designed.

But the majority of the work isn’t so lighthearted. A young girl is raped, “fuckin’ shout and I’ll cut yer,” there is child abuse and incest, “the bedroom door flying open in the night…her father with his hand on his fly, approaching the bed where she begged him not to,” and the lure of addiction is described to its awful final consequence, “without methadone…she would again start opening her broken-toothed mouth for strangers’ dicks, so she could feed her veins.”

The book seems to wallow in its own grittiness.

It is a novel that deals with ‘social issues’ – and you can almost feel the quotation marks around that description. A young girl cuts herself, “the blade drew the pain away from her screaming thoughts…relief and release in every cut,” a mother’s heroin addiction is consuming, “in search of cigarettes, but really craving the spoon, the flame and the needle.”

Many reviewers objected to the author of children’s books writing such explicitly sexual and violent material, and the potential for their own children to be exposed to it. I don’t agree that Rowling has a responsibility to children any more than Bret Easton Ellis has a responsibility to serial killers. And yet it is shocking, and I did wince, and it infuriated me that I couldn’t dispel from my mind the knowledge that this novel was from the author of Harry Potter.

The essential problem is the discord between Rowling’s style of writing – a manner virtually unaltered from that of the Potter books – and the newly violent and graphic material. She does her best to paint over it, but the brightness only gleams through underneath. No matter how many times she writes four letter words, or describes the misery and sadness, the resentments and pettiness of adult life, she can’t be gritty — either because we can’t forget who the author is, or it’s a writing style Rowling is so used to that she can’t forget it herself, and her prose remains unchanged.

It must be said that The Casual Vacancy is, once it finds its own rhythm, a highly enjoyable book. The story moves along at a rollicking pace – the book is almost entirely action and dialogue – and we never stay with any one character for more than a chapter, as though Rowling felt scared to stay too long in any one place.

Like all fantasy writers, Rowling transposed familiar emotions and situations into the realm of the imaginary. Her readers could never wield a wand against evil, or attend Hogwarts, but they could know what it’s like to feel fear, to be bullied. It is these emotions she writes exceptionally well in the new novel, able to convey the dread of the bullied for their tormentor,

She spotted Fats Wall at a distance, loping along with Andrew Price. She would have known his shape and walk anywhere, the way something primal inside you helped you recognize a spider moving across a shadowy floor.

If we create monsters to make sense of the darkness in the world, here Rowling writes the awfulness of the everyday. You can almost feel Rowling’s mirth in her addition of an element of the supernatural into her story midway. But of course, the Ghost of Barry Fairbrother is really no ghost at all, and the magic is simply that of technically efficient kids able to hack into a poorly run parish council website.

We were told very specifically in the announcement of The Casual Vacancy that this was to be J.K. Rowling’s First Book For Adults. But the Harry Potter books were for adults anyway, you could see their colourful spines on trains everywhere, brightening the commute to work (and what a naive time that seems now, compared to our current train rides coloured in Shades of Grey).

Rowling didn’t treat her young readers as mindless children. She understood that her audience grew in age as the stories progressed, and so her narratives too became darker, dealing with increasingly more frightening themes along the seven Harry Potter texts. Perhaps this is why the premise of the announcement itself seemed so strange.

I guess, all in all, there are worse fates than to be cursed with endless references to your wildly successful back catalogue. There are many more authors who failed on their first attempt at a novel and are not read at all. The book will sell on the strength of her name alone, and is already on the bestseller lists. But I’m still not sure whether it’s a failing of myself as a reader, or of Rowling to properly distance herself.

In an extended interview with the New Yorker, Rowling said, ‘There is no part of me that feels that I represented myself as your children’s babysitter or their teacher. I was always, I think, completely honest. I’m a writer, and I will write what I want to write.’ With time, Rowling will be released from the shackles of the Harry Potter books, and we all will too.