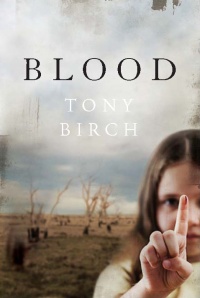 // In one of the most vividly memorable moments of the novel, our young protagonists Jesse and Rachel wander like giants among miniature versions of the Eiffel Tower, the Great Pyramids, Dutch windmills, and the Leaning Tower of Pisa. They have stumbled across ‘Carson’s World in Miniature’ – an abandoned amusement park where they walk among the crumbling remains of cheap replicas of all the wonders of the world.

But they can’t, initially, see any representation of their own country among these strange creations.

This scene and exchange is key to the two things I want to explore in this piece – Birch’s representation of Australia (reading it as a Miles Franklin nominee) and the strangely fairytale quality of the narrative.

Blood is not a novel suffused with Australian-ness. Indeed, the setting could be anywhere – Jesse and Rachel could just as easily be American children like Scout and Jem from the screening of To Kill A Mockingbird they see at a retro movie theatre one afternoon. Jesse, the narrator, doesn’t describe his surroundings because there’s no point noticing them – they’ll inevitably be gone soon. Their lives are a kaleidoscope of sharehouses, foster care homes, hospitals, police stations, and road trips onto the next place. The sense of place isn’t strong because this is essentially a story about placelessness. Locations in this novel are simply words – with Melbourne in the second half of the novel gaining an almost mythical quality because it connotes ‘home’ and, even more importantly, ‘safety.’ We generally only notice a setting when Rachel captures it on her disposable camera. It is, then, precisely the placelessness that makes this story effective.

Birch’s tale is a dark, brutal, troubling story. It is essentially realist, told from the perspective of Jesse, a teenage boy living with his unstable mother Gwen – who goes from bar job to bar job, frequently taking up with men who are ‘good with their fists’ and won’t let her children address her as ‘mum’ because it makes her feel old – and his younger half-sister Rachel who, from the time she was born, he knew it would be his job to protect. Blood is a story about two children, their attempts to escape from danger and abuse, and their bond forged (several times) in blood.

Yet, for all its graphic violence and often explicit language, it has the underlying quality of a classic children’s fairy story, such as a Brothers Grimm tale – with dark forces at play and two young protagonists who must escape from the evil villains. Though To Kill A Mockingbird’s Scout and Jem are the obvious allusion, I was reminded also of Hansel and Gretel: with the picnic basket the sinister boyfriend Ray uses to lure the family away, and Jesse and Rachel buying the lollies and junk food that almost leads to their capture.

In the scene to which the title refers, where Jesse cuts his own thumb and his sister’s in order to combine their blood and make them full siblings, Jesse employs the notion of magic: ‘It’s a powerful spell and it can’t be broken. Not by anyone.’ Rachel, too, uses the language of fairytales once their blood has been combined: ‘I’m your magic sister.’

Blood is rich with talismans and signs that act as keys throughout the text – Tarot cards, tattoos, superstitions, rituals. The children have little else with which to navigate their course, no adult to ask for guidance but what they can decode from symbols. ‘But before we go, Jesse, can we have one more go at the cards? Maybe they can tell us what to do?’ Twice on their journey they consult their mother’s tarot cards, and both times they are saved by them: first by the image of the ‘Tower’ and then by the fateful advice ‘Strength.’

The lone father figure they had – one of Gwen’s boyfriend’s, Jon, tells them early on in the work: ‘Any fella inside for the time I did, they carry their history with them. Your body is a map. Or a book.’  In the same way they decode the ancient pictures of the tarot, they read the tattooed marks on their captors’ bodies. ‘He was a step away from me when I saw the mark on his cheek, just below his eye. It was a tattoo. The teardrop tattoo.’ There is even an old man called ‘Magic’ who warns them: ‘It’s gonna be dark, later on, sometime soon, boy. Clouds gonna come. Rain and thunder. You got to take care.’

Jesse is in no way a naïve narrator, indeed he is insightful beyond his years, an intelligence learnt through struggle, and the need for survival. This allegorical dimension of the novel can be seen in many ways as a coping mechanism for someone dealing with incredibly violent and traumatic events, and a consoling method for his younger sister. It is this otherworldly, dark-fairytale quality, captured beautifully in the Carson’s World in Miniature scene, that turn the book’s potential weaknesses – the one-dimensional nature of the villains, the almost caricatured representation of a no-hoper mother, and the explicitness of some of the symbols – into strengths, adding a lightness to the narrative, and making it a quite brilliant piece of storytelling.

Birch has created, with his debut into the longer form, a modern Australian novel that doesn’t need to explicitly draw attention to itself as Australian — ‘What do you mean? We’re in it.’