— This essay originally appeared in The Lifted Brow. 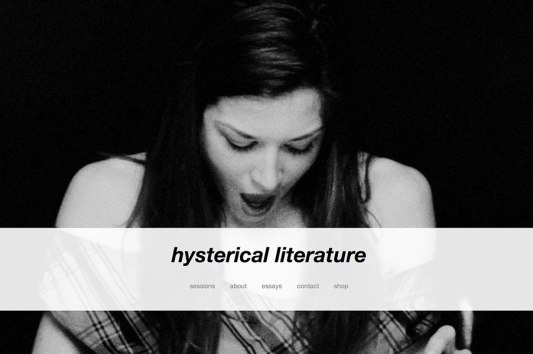 // “We were at a party, you and I, in celebration of a long-forgotten cause for joy.”

A girl sits at a table with a book in her hands. She’s wearing a chequered dress that is at once demure and revealing. The film is black and white, yet the girl is monochrome herself – dark jet hair and ivory skin. She opens the book and begins to read a passage from it aloud. At first she seems nervous and somehow fragile, her breathing shallow as she reads quickly.

The prose sounds like a dark love letter. It’s scattered with endearments like “darling” but the subject is death and blood and pain. At least, those are the words I can make out. It’s difficult to follow the narrative as her breathing becomes uneven, the syntax and rhythms skew. It’s just before two minutes in that you begin to suspect the point of the video has little to do with the words being read.

The girl stops short and winces as you realise something is happening beneath the surface of the table, unseen within the tight focus of the camera. Finally, after almost six minutes of gasps and stammered sentences, a look of both pain and ecstasy crosses her face as she orgasms, unmistakably.

“The camera came and exhorted you all to be witty for posterity.”

There are, it turned out, eight such videos, each featuring a lone female at a desk reading aloud from a book until overcome with pleasure. Titled the ‘Hysterical Literature’ project by the artist Clayton Cubitt in 2012, the purpose of the videos was very clearly not  the content of the prose being read. As one journalist wrote of the project in a piece for Salon: “…frankly, they could read their grocery lists and I’d still hang on their every word, every breath, every squirming movement during their vulnerable, resistant build to orgasm.” Though in his interviews on the project, Cubitt notes that the books are important and revealing of the women who read them, the main point was that the women read something to distract them, rather than simply having to sit.

The videos in the series were created as an extension of Cubitt’s earlier works, which explore distraction in the poses of portrait sitters (as Cubitt writes of the inspiration for the project “Today, everyone has a well-practiced pose for ‘selfies’ and social media, and I was interested in how I might make a portrait that makes it impossible for the sitter to maintain this pose”). In the Hysterical Literature videos when the camera begins filming, an unseen assistant beneath the table distracts the reader with a vibrator. The reading aloud of books was chosen, according to Cubitt, as a way to remove “the pressure to pose or sound a certain way in a formal portrait or an interview.”

Though the early parts of all the videos do have a captivating quality – as though it is the words themselves that overwhelm and bring shivering pleasure to the readers – for the Hysterical Literature project what is important is the fact of reading rather than what is being read.

“You, my darling, leaned over and – performing for the camera – pushed your tongue through my plastic mouth and into his. You were tongue-kissing the personification of death.”

The women all chose texts that had little in common – American Psycho, Beloved, A Clockwork Orange, Sexing the Cherry, Still Life with Woodpecker, Roquelaure’s Sleeping Beauty and a poem by Walt Whitman – other than the broad fact that they are classics, and transgressive in their subject matter or stylistics. And yet every time I have watched the Stoya video in the years since, the less it became about the surprise or build of Stoya’s giggling orgasm, instead centring more and more on the words she is reading. Yes, their delivery is captivating, but there is something in Stoya’s literary choice, more than any of the other Hysterical Literature videos, that is darkly seductive. 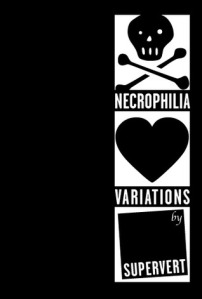 “But you can’t kiss death without death kissing you back. Death is a passionate kisser.”

Stoya reads ‘Confessions of a Skull Mask’, the penultimate story in  Necrophilia Variations by an author known as Supervert. (Though written as male, we don’t know if Supervert is one person or many. The stories are distinct but they do intertwine in parts, suggesting a single author.) Beginning a book with such a title, you prepare for what will surely be graphic and erotic descriptions of sex with corpses. This is what you steel yourself against. The volume, though, is nothing like this – it approaches necrophilia from so many different angles and possibilities, rarely with any graphic sexual descriptions, that the work becomes more about the entanglement of death and desire. Like a seductive fiend whispering into your ear, it asks you: is it really so unreasonable for sex and mortality to be intertwined? Surely, it seems to coax you, amongst the thirty-two stories in the volume there will be one that might appeal to your more morbid side, enticed by the dark or the dangerous.

The further into the book I delved, the stronger its hold grew. Part of this can be ascribed to Supervert’s focus on the second word in the title. Necrophilia Variations is a series of philosophical meditations; it is a dark thought experiment – challenging, grotesque and disturbing, and, while it casts its spell, compelling.

It attempts to lure you into viewing necrophilia as mundane: “What is necrophilia?” Supervert asks. “A spurt of fluid on an inanimate object. In the grand scheme of things, it has no more or less moral value than blowing your nose or peeing on a bush. What’s the big whoop? What’s the source of the fear?”

Is love of a long-dead literary figure a form of necrophilia? The protagonist of ‘Labor Day’ ruminates on this as he reads poetry from a centuries-old writer:

“She was dead, long gone, and you couldn’t even have sex with her cadaver because that had no doubt disintegrated into the earth by now. There was nothing left of her, just her poems, and as I started to drop off to sleep I wondered if it were a kind of necrophilia to fantasize about figures from the past.”

This question stirs up challenging thoughts for generations of lit students like myself. Supervert continues with this theme, suggesting that the creation of great art is akin to making oneself a cadaver for the imaginative necrophilia of future generations. “Only art can make the future love you, and that is what art is about: attraction at a distance, seduction from the past, inveiglement from beyond the grave. Art is a plea to love me when I’m gone.”

“I bite your lips, chew your tongue, leave a little taste of blood in your mouth as a portent of things to come.”

Like the chaos theory butterfly effect, Supervert’s prose urges you to consider the impulse toward necrophilia, from all the aesthetic, philosophical and moral possibilities that ripple out from it. It’s less about descriptions of having sex with the dead, but more about what it might mean to have sex with the dead, how this most explicit mingling of eros and thanatos might affect you and a world were it was permissible.

In the story titled ‘How Would You Like It?’, the protagonist suggests the use of cadavers to satisfy the predilections of “necros” might be a way to serve the social good:

“Think of it. If you repress a sadistic individual, he only gets worse – meaner, crueler, more vicious, to the point where he just might be headed down the road toward that ultimate act of sadism: murder. But what if you provide a release for his pent-up penchant? Send him to the cemetery to find necro-friendly graves. Let him put handcuffs on the dead and beat them senseless with whips. Who cares? He’s not hurting anybody.”

The book’s imaginings reach their nadir in this story,   constituting perhaps the darkest of the mind experiments, as Supervert suggests: “Let pedophiles molest the bodies of dead children. If they’re really hardcore and want younger and younger flesh, give them the medical waste resulting from first-trimester abortions. Why not?”

There were times when I felt deeply uncomfortable with the politics of Necrophilia Variations, such as the linking of the rights of homosexuals to an argument for equivalent rights for necrophiliacs, as well as the constant use of the dead and often mutilated bodies of beautiful young women—to heighten the contrast between beauty and grotesquerie—as a sexually arousing thing. However, the entire work is dealing in such morally murky territory that to begin drawing lines or objecting to one imaginative action would be to hurl the entire volume aside. Indeed, the overarching theme of Necrophilia Variations is the necessary disjunction between morality and art.

“You wouldn’t criticize a good Samaritan for being ugly. Why criticize an artist for being immoral?” This is from one of the strongest stories in the work, ‘Trauma Response Program’, where the protagonist deals with the questions of ethics versus aesthetics when it comes to sex and death. A couple walks through a Post-Impressionist exhibit in the Museum of Modern Art, discussing Picasso’s famous painting the Demoiselles d’Avignon and the violence much art appears to commit to the canvas. It is this discussion he later remembers when in conversation with his new partner:

“When you paint death, you make it beautiful. What do you think all those pictures of the crucifixion are? They’re beautiful images of death.”

“I’m sorry,” she said, smoothing the polish across her nails, “but five thousand people dying is never going to be beautiful, no matter how you think about it.”

“Maybe it’s never going to be beautiful to you, but you can’t speak for other people.”

“Well, if anyone finds it beautiful, that’s sick.”

This dialogue seems to capture the two main possible reactions to Supervert’s work. Certainly it made more certain my response to it – that Necrophilia Variations is a translation of the “sick” into another manner, Supervert’s often beautiful prose and his subtle, slippery arguments heightening it.

“And even then, when you are hideous dust, I will remain true.”

In my first few viewings of the video, the more I listened to Stoya’s words the more I wondered at her obscure choice of text . In her essay outlining her thoughts on the session, Stoya writes that she selected a section of Necrophilia Variations because:

“I’m currently in an oddly non-morbid obsession with something triangulated by the way an orgasm affects brain chemistry, the reasons behind the French nickname of la petite mort, and why my mind goes completely blank when I’m at the height of a sexual experience. There’s something in there, death and sex, maybe change or growth… Sometimes I can brush this concept with my fingertips, but I can’t grab hold and inspect it yet. The only way to understand is to wallow in anything that might hold a clue until it all clicks together”

Or, as she puts it for the Too Long Didn’t Read section of the audience: “That’s the book that felt right.”

It’s difficult to think properly about the content of the words during the first few viewings of Hysterical Literature. But Stoya’s choice does indeed feel right. Sex and death are in many ways linked: knowledge of sex, like knowledge of death, can’t be explained without being experienced. Both seem to hint at or promise something beyond.